Trump’s Wall, being an euphemism for border defense installations, is a part of Pentagon’s plan to redeploy assets from all over the world toward challenging China and Russia.

On February 14th, known in Russia as Saint Tryphon day, (Tryphon here being Tryphon of Campsada, a patron saint of gardeners, hunters and cats) the U.S. Secretary of State Mike Pompeo took a trip to Russian Foreign Minister Sergey Lavrov’s Bayerischer Hof hotel during the Munich Security Conference, and this encounter is something the American side wanted to keep under wraps. Judging by their body language, while interacting Lavrov and Pompeo are at ease with each other like old friends. Reportedly, on his way out Pompeo wished his Russian counterpart “good luck,” which the ministry spokesperson mistook for well-wishing. When an Italian from New Jersey wishes you ‘good luck with that,’ it means that he thinks that your undertaking is either too hard or impossible, and he is too frustrated to talk you out of it. The U.S. side had requested that there be no press conference or joint statements and no journalists or photographers even be invited.

On Saturday, Pompeo appeared at an annual gathering of Western diplomats and business leaders to declare “I’m happy to report that the death of the transatlantic alliance is grossly overexaggerated. The West is winning, and we’re winning together,” and called to confront China on all fronts. His enthusiasm was met with silence by British and German officials. Macron suggested that the word “weakening” would be more correct than “winning.” The rest of the West just wasn’t buying it.

Pompeo misquoted. Declared was not as much death of the alliance, as of its brain. Some creatures, like cockroaches, can survive without their brains for days, some thrive without even acquiring brains, among them the tardigrade or the moss piglet, the most indestructible creature on earth. It’s warranted to stay alive even in open space far longer than NATO and its members would.

I am not suggesting that out of all worldly creatures, Pompeo reminds me tardigrades the most, but merely that Italian-Americans are hardy people. They fought hard for what they have got, and they are not going to give it all up, European interests notwithstanding. Pompeo wants to fight Russia and China in Europe to extend the life of the American project. Old Europe has been around a couple of millenniums longer than the former British colonies in the New World and has seen it all. She is digging her heels, suggesting that Americans should do the fighting in their own backyard.

Curiously, and counterintuitive to a spirit of the American project, that’s exactly what they have been doing, as of late.

Last year Washington repurposed some of Department of Defense funds towards wall spending, and particularly military constructions at the border. Some called this decision ‘looting.’ Among those cut were schools for the children of U.S. military personnel in the U.S. and overseas, special forces training facilities in Poland and Romania, and construction to support the Puerto Rico National Guard. According to Defense News, over 100 construction programs oversees mostly were drained of funding.

About $4 billion were freed and redirected for the “wall” last year. A month ago, a section of this wall was toppled by some very strong wind. It was troubling wildlife and disrupting the environment of 93 endangered species from jaguars to ocelots to Mexican gray wolves, we were told.

Days before Lavrov and Pompeo secret meeting in Munich, Pentagon announced it intention to cut F-35s programs, other equipment to pay for Trump’s border wall.

“Among the victims of the cuts: a mass of aircraft purchases including F-35 joint strike fighters, C-130J cargo aircraft, MQ-9 Reaper drones and P-8 maritime surveillance planes, as well as ground vehicles and naval priorities. the plan would shift $2.202 billion in FY20 defense appropriations and $1.629 billion in FY20 overseas contingency operations funding towards the wall.”

Pentagon, also, is looking to take more money for the wall from same place as last year: OCO or overseas contingency operations wartime funding. An account safe from Congressionally imposed limits and oversight.

According to the Defense News, “the White House’s $750 billion fiscal 2020 budget request is $34 billion more than the enacted fiscal 2019 appropriations. It includes $545 billion in base defense funding, as well as $66 billion in traditional overseas contingency operations funding for warfighting costs, $9 billion in emergency funding, and $98 billion in costs that have been transferred from the base budget to OCO.” So, a couple of billions shouldn’t even be on the radar.

“Despite the hefty OCO bump, the Pentagon for the first time in recent years is reducing how much it is spending in Europe,” reports the Airforcemag. 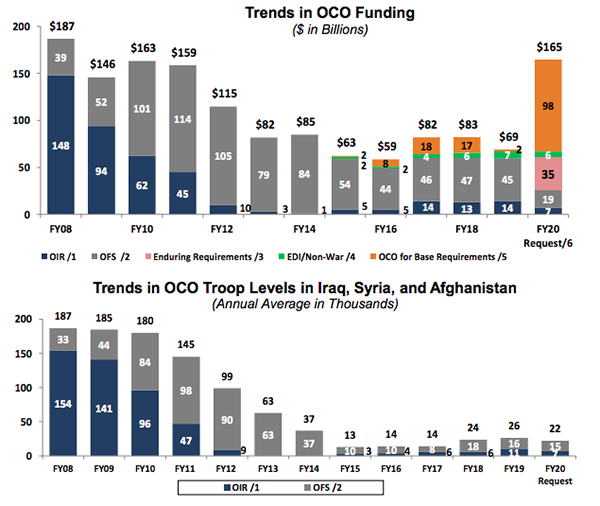 The freed funds, as you have already realized, will go to build the wall.

On Feb. 4, 2020, Navy Vice Admiral Andrew “Woody” Lewis, the commander of the Navy’s 2nd Fleet, reactivated in 2018 specifically to address the surge in Russia’s submarine operations in the Atlantic, said that “the Navy no longer views sailing off the East Coast or across the Atlantic to be “uncontested” movements.”

Public decided that the Admiral lied to get more money. No one even mentioned the Pacific.

Meanwhile, the Americans are quietly withdrawing from everywhere and redeploying their troops back to the U.S.

Despite of pressure from some clueless lawmakers, Defense Secretary Mark Esper refuses to reconsider plans to reduce military forces in Africa. “The goal would be to move troops out of Africa and redeploy assets toward challenging China and Russia, per the National Defense Strategy.” The troops are being redeployed back to the U.S., where they will be concentrating on the border with Mexico and along the coast in California.

“We are looking at the entire map and moving forces into a posture where they are able to longterm be addressing key issues with regard to China and Russia,” Esper said.

Pentagon tentatively has just reached an agreement with Taliban to “initiate the peace negotiations and the withdrawal of U.S. troops”

Secretary of Defense Mark Esper has said the Pentagon is considering reducing the American footprint in Afghanistan from 13,000 to 8,600 troops with or without a deal.

U.S. service members in South Korea remain isolated for 14 days at four stateside military bases along with 1,000 government officials and family members quarantined due to exposure to the Wuhan coronavirus.

The Philippines just have asked U.S. forces to leave their islands indefinitely. Without the Philippines suffocating China from a naval standpoint becomes much more difficult and perhaps impossible.

In two years Pentagon progressed from building up US forces in Russia’s backyard in 2018, to putting everything on hold to concentrate on building the border wall in 2020. 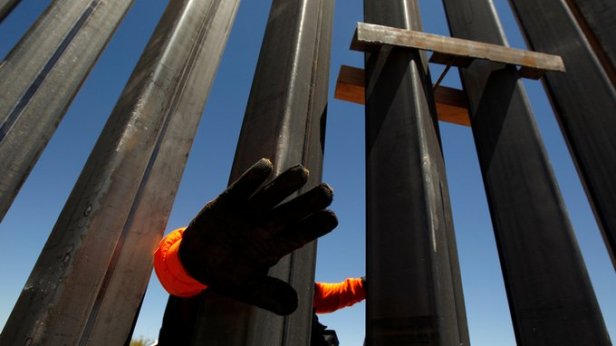 Pentagon’s defense constructions on the southern border by now looks like $10 billion project. It could be ten times that much, for all we know. Will they have a wall, troops, air force, equipment, all along Mexican border? Do they plan to dig trenches, also?

The real war on American territory would produce misery and destruction on a scale incomprehensible for the populace. The fighters, mercenaries, regular troops, gangs, and just guys from Latin America, Middle East, Asia, China, Africa. Europe and Russia will be eager to come to fight against the Americans on the American territory. 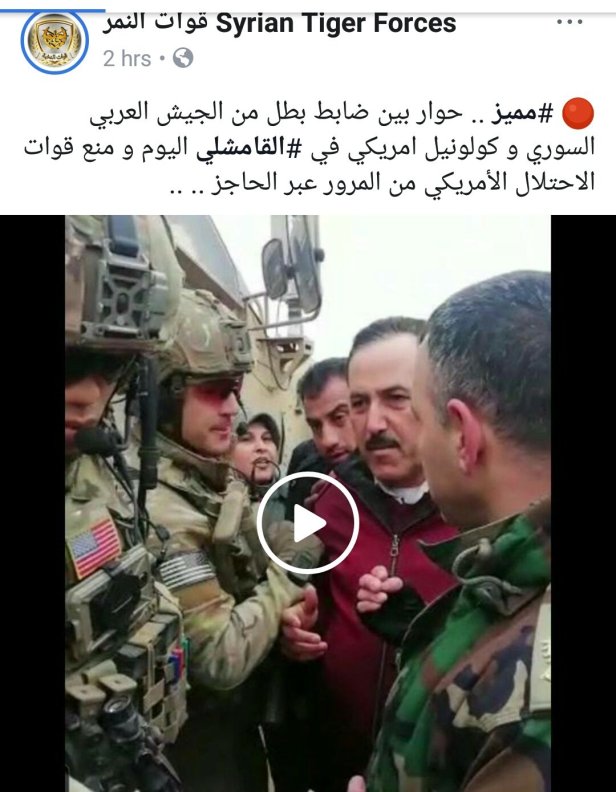 Americans will fight each other and against this flood of armed men for every town, every farm, every house and every office building, and no one, no one in the world will come to assist them. It will be a long and lonely battle. At the end, the Russian army will arrive to establish control and to re-colonize the North America, as Russians first did centuries ago.

MY BOOKS on Amazon

and at the Saker Community Store

You can find some of my past articles here