If you have ever searched the RT.COM posts for some official information from the Russian government, most likely you found it on the Russian language section of the Russia Today, since very few being “leaked” to the English section, and practically none to the German and French, not to mention the Arabic and Spanish. Even if you are persistent enough to find the official information posts that, as a rule, are hidden under the general NEWS tab and not under RUSSIA tab, you will almost never, as a rule, be provided with the direct link to the source. For a journalist and a casual reader alike, it means additional research time to verify the statements.

I have already wrote before about an interesting practice of the RT’s editors of posting and quietly removing Russia’s government official statements, like in the case of Patrushev and the Missing Official Statement on Iran that enraged Israel. Many of my readers commented on Twitter that the RT is doing everything to disprove the myth that it’s a Russian government propaganda outlet. Yes, the RT is funded by the federal budget, like the BBC is funded by the UK government and the Radio Free Europe/Radio Liberty is a United States government-funded organization, but to independent observers it appears to serve interests of other governments and even rogue semi-private armies like NATO, and NOT the Russian government.

In this hash light, it’s not surprising that the RT avoids linking to the official sources like en.kremlin.ru, but eagerly provides direct links to sworn enemies’ sources like NATO occupation forces in Ukraine called “the Coalition Forces” under the cover of reporting about the third country that is NOT a member of NATO. I am talking about Finland.

The link in question was posted inside an article about Finland’s foreign minister popping up in the area of the line of force separation in Donbass. This line separates the joined international NATO and Kiev regime troops and the Armed Forces of Donetsk republic. 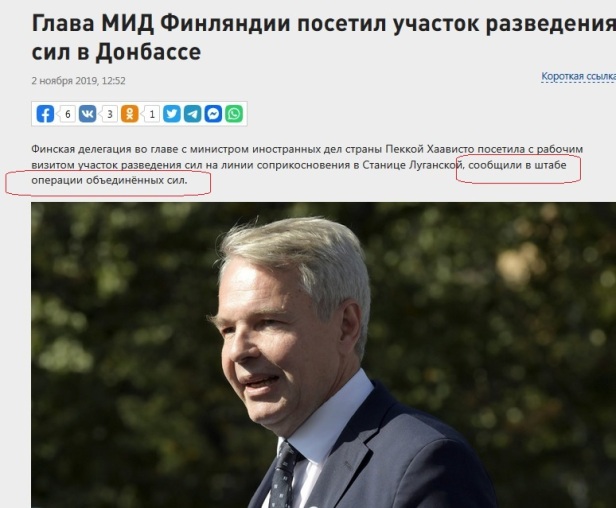 The article wasn’t posted in English, so here is my unofficial translation for education purposes only.

Finland’s minister of Foreign Affairs visited the line of separation of forces in Donbass.

“The Finnish delegation headed by the Minister of Foreign Affairs of Finland Pekka Haavisto paid a working visit to the site of separation of forces on the contact line near Luganskaya village, as was reported in the headquarters of the operation of the joint forces.”

In the original article here is located the direct link to the NATO Joint Forces Ukrainian language FB page. Noticed that the RT doesn’t explain what is “the operation of the joined forces” and what they represent.

“The purpose of the visit was to demonstrate support for Ukraine, to obtain a relevant information on the development of the security situation,” the press service of the headquarters reported on Facebook.”

Again, the RT is talking about NATO headquarters in Ukraine, which neither Ukraine no Finland holds a membership. The deployment of NATO forces and command centers in Ukraine should be a subject of an ongoing investigation by the RT. Instead, the RT editors craftily avoid mentioning NATO anywhere in this post! What joint forces? The Galactic Empire?

“The Finnish delegation expressed concern about the ongoing conflict in Eastern Ukraine, which has a negative impact on the lives of the civilian population living on the line of contact.”

Earlier, Russian foreign Minister Sergei Lavrov expressed hope for Ukrainian President Vladimir Zelensky to ensure the implementation of orders for the withdrawal of forces in the Donbass.

The process of withdrawal of forces in the area of Zolotoe settlement was to start on October 29.”

If an unsuspected reader clinks on the link, he or she would be taken aback by the imagery inspired by the Bandera UNA-UNSO pro-Nazi death squads of the Great Patriotic War epoch and the words “Joint Forces Operation.” 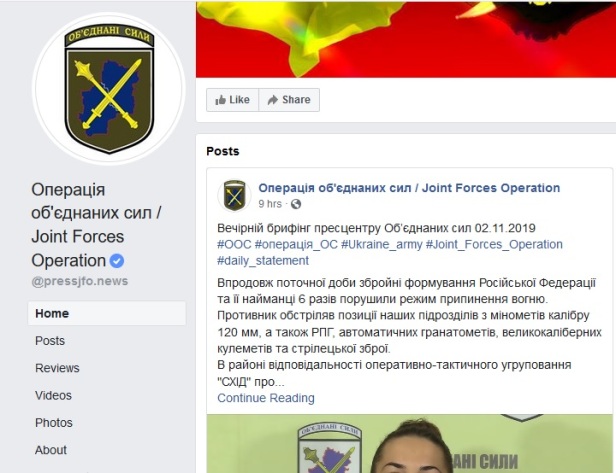 Kiev regime keeps calling the Western invasion of Ukraine driven by NATO “The Russian-Ukrainian war,” when in fact it’s NATO Joint Forces Operation troops that are active on the battlefields in Ukraine and shelling Russian villagers. Most civilians killed in this war are those who lived on the territories of the Donetsk and Lugansk republics and they were killed by the Kiev regime and NATO forces including the tactical group “East.”

Since the RT link wasn’t even to any particular post about Finland, but to the NATO JFO FB page in general, you are greeted by this post:

In my translation from Ukrainian:

The stunning gem of good ol’ Joseph Goebbels’ “repeat lie many times and it will become truth” exercise.

Thank you, an unnamed pro-Bandera and pro-NATO RT editor for providing the platform to spread NATO’s Russia-hate propaganda on Russian taxpayers’ dime, because billions allocated for the war against us are not enough!

References that the RT fails to provide: In 2017 Kiev Poroshenko regime filed a lawsuit against Russia in the UN International Court icj-cij

In January 2017, the Kiev administration filed a lawsuit against Russia titled:

Kiev lost this lawsuit on the grounds that the Poroshenko’s regime had failed to provide any evidence of the Russian Federation forces being on the territory of Ukraine and fighting against the joined Ukrainian-NATO army.

In March 2019, the RT hired one of the leading Khodorkovsky/Soros/Open Russia operatives, Maria Baronova, a coordinator of banned in Russia as a hostile foreign agent “Open Russia foundation,” of Soros/Khodorkovsky. Baronova was hired as a chief editor for the Russia Today.

The news about this event has sent a shock across Russia by the utter chutzpa of Soros and the CIA behind him in taking over one of Russia’s most internationally renowned brands.

This explains the RT ever increasing deterioration from one of the world most trusted news sources a few years ago into a bait click-farm with pics of buts and tits on its front page and direct links to Russia’s most vicious enemies. .

My previous mild criticism of the RT:

A scenario for Drug Enforcement setup was written in 2016

Margarita Simonyan and the “Black Towers of Kremlin”

My books on Amazon

My books in the Saker Community book store