The following is a conversation between readers of the Harvard Crimson regarding the letter to the editors from a student George S. Schneiderman, 1995, titled Jews and the Slave Trade: Just the Facts. February 12, 1992

George S. Schneiderman, 1995, was also one of the undersigned of the Open Letter to Jared Kushner from Harvard Alumni, authored by David Rochelson and published on Jan  31, 2017 demanding a personal meeting with Jared Kushner to address their concerns.

“Yes, but for every Myer Lansky there are hundreds of Al Capones. The magnitude of Christian crimes so outweighs the misdeeds of a handful of Jews. Maybe if you all listened to the Jewish man who asked you to have mercy on the least among you instead of brutalizing humanity like the Romans did you would actually have the higher moral ground you claim in judging Jews. And when did Christians cough up even one Einstein?”

Sheeba Kitty to Minna Alegra • a year ago

What magnitude of Christian crimes??? And see how you word it. The CHRISTIANS commit crimes but the Jews…. only misdeeds?

See that kind if unfair bullshit is why people might not like you. But yet you whine to high heaven about anti semites.

“WHAT CRIMES EXACTLY HAVE WE COMMITTED? WHY DO MAKE ACCUSATIONS YOU CANNOT BACK UP?”

“The brutal murder of tens of millions of Christians in Russia, by the jewish-controlled and led Cheka, after their usurpation of power in that land, and the wholesale demolition of their churches, but the retention of their synagoues.
As detailed explicitly in Alexander Solzhenitsyn’s great work “200 years together”.
The starving to death of millions more Christians in Ukraine in the 30’s; an event of unparalleled wickedness known to history as the Holodomor.
The wholesale murder of Palestinians, and the stuffing of their bodies into wells, by the despicable and unspeakably wicked organization known as the Haganah, under the arch-terrorist Menachem Begin, who described Christians and the goyim generally as “insects, cattle at best, human excrement”.
The endless crimes of the jews over the centuries throughout Europe, crimes for which they were expelled wholesale on innumerable occasions from the lands they had infested.
The crippling and absolute perversion of the United States following upon the jewish destruction of that nation’s financial system by the creation of the Federal Reserve ; a system which enables the jew to bribe his way wholesale into the very halls of power and influence; and to then use the military power of the nation to destroy all the enemies of “israel” in the Middle East.
You know all these things, and rejoice in them, but lie that these things are unknown to you.
For this, your punishment will be severe, and eternal.”

And here how they respond to the list of endless crimes against humanity the most horrendous crimes committed just in one 20th century:

Zapre Tim Webb • a year ago “Wow …. So Stalin the orthadox Christian is a jew now ? …. You’re mental you mate.”

The facts about CHEKA: „Anyone who had the misfortune to fall into the hands of the Cheka,” wrote Jewish historian Leonard Schapiro, „stood a very good chance of finding himself confronted with, and possibly shot by, a Jewish investigator.” In Ukraine, „Jews made up nearly 80 percent of the rank-and-file Cheka agents,” reports W. Bruce Lincoln, an American professor of Russian history.”

“In his 1920 book, British veteran journalist Robert Wilton offered a similarly harsh assessment: “The whole record of Bolshevism in Russia is indelibly impressed with the stamp of alien invasion. The murder of the Tsar, deliberately planned by the Jew Sverdlov (who came to Russia as a paid agent of Germany) and carried out by the Jews Goloshchekin, Syromolotov, Safarov, Voikov and Yurovsky, is the act not of the Russian people, but of this hostile invader.”

President Putin said for the assembly of the extremist Habad Loubavitch cult members that the Bolsheviks government was 85% “Jewish” and that “driven by their extremist ideology” they murdered 18 million Russian people just in the first five years of their terrifying rule. The remaining of 15% of the Bolsheviks government were those Poles, Latvians, Fins, Germans, Armenians and other minorities, who weren’t Orthodox Christians. From the start, Stalin was the only Orthodox Christian man in the government while married to a female cult member, and controlled by her, in their eyes.

Why did Trotsky and the American Jewish bankers, who financed Trotsky and other American “Jewish” criminals, allow Stalin into their government?

BECAUSE THEY ASSIGNED STALIN A ROLE OF A SCAPEGOAT, or as they say now, for a possible deniability.

2.5 million Talmudists attacked Russian state and the nation, murdered its elite and ruling class, took all the managerial key positions in the government, police, army, punitive apparatus, jails and death camps, food distribution and trade, industry, higher education and schools, media and art. They destroyed a great civilization  that they didn’t know, couldn’t understand and hated, and they murdered estimated 25 million Russian people in wars, repressions and organized famine from 1917 to the 1930s.

Now, they BLAME ONE ORTHODOX CHRISTIAN MAN  FOR ALL THEIR CRIMES! 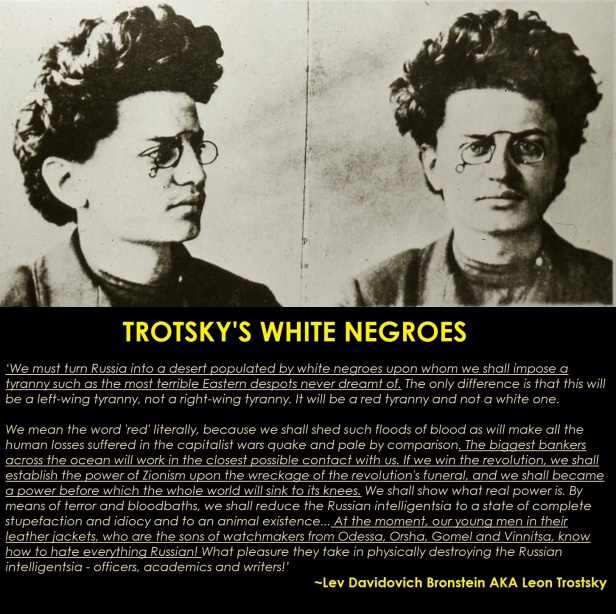 These people were Satanists, open unapologetic Satanists. We, Russian Orthodox Christians seek justice and retribution for our nation’s suffering and losses.

MY BOOKS at the Saker community store